Here is an update on the flowing succulent plant in my garden. My Complete Book of Cactus and Succulent volume is telling me this is an aeonium haworthii and even includes a photo. Most of the aeoniums I see have flat leaves and tend to look like a plate on the end of a stick. Their leaves tend to be flat and long.

This plant has leaves on the end of a stick, but they are fat and pointy on the ends. It has a red tint around the edges of the lime green leaves. Much more like the echeverias I’ve seen. This plant forms a tidy dome of green rosettes when grown in the ground. It also has aerial roots hanging down into the soil.

Either way, it is blooming now in my southern California garden. It is such a unique process I am documenting it for my succulent plant-loving readers. First, it sends up a separate stalk over the dome which at first looks like an alien growth or a cluster of baby plants on the end of a branch. Now the leaves are spreading out along the stalk as it gets longer and we can see yellow buds forming on the very ends. The buds will open to 1/2 inch yellow daisy-like flowers. The branch dies off after setting seed.

Of all the succulents I am growing this one seems to be the most susceptible to high temperatures, especially during my 120 degree summers. It gets a little bit of shade from my Baby Jade (Portulacaria Afra), but I need to rig up shade during heat waves. Next time I will plant my aeoniums in part shade. Later on this summer I’ll share some of my crazy discount shade ideas with you.

Aeonium can survive light frosts and are hardy to about 35 degrees in winter. Aeonium is classified as drought tolerant and will live on rainfall alone in my garden. However, it does start to look a bit shriveled during heat waves so I sometimes sneak in a good soak every few weeks when the weather heats up. Propagation is by simply sticking a branch into the ground and keeping it watered every other week or so.

My succulent patch has an underwater theme. The Aeonium fills in the role of sea anemone. A ceramic fish I found at the dollar store adds to the theme, (although I should paint it orange to look like a Clown Fish). A Gollum Jade grows next to it and adds to the theme planting in the roll of sea coral. I think the suggestion of water in a dry garden adds a refreshing feel.

Try to stay cool out there and happy gardening!

Crassula Plant Rescue Update
As you may recall, I rescued a crassula succulent plant from...
Wisteria Vine Blooming in So Cal Dramatic And Romantic
The wisteria is blooming over the patio, here's a nice shot ...
Quick Ideas For Red, White And Blue Flowers For A Patriotic Garden
I was driving around and saw this patriotic display of petun... 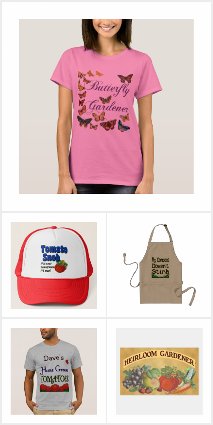